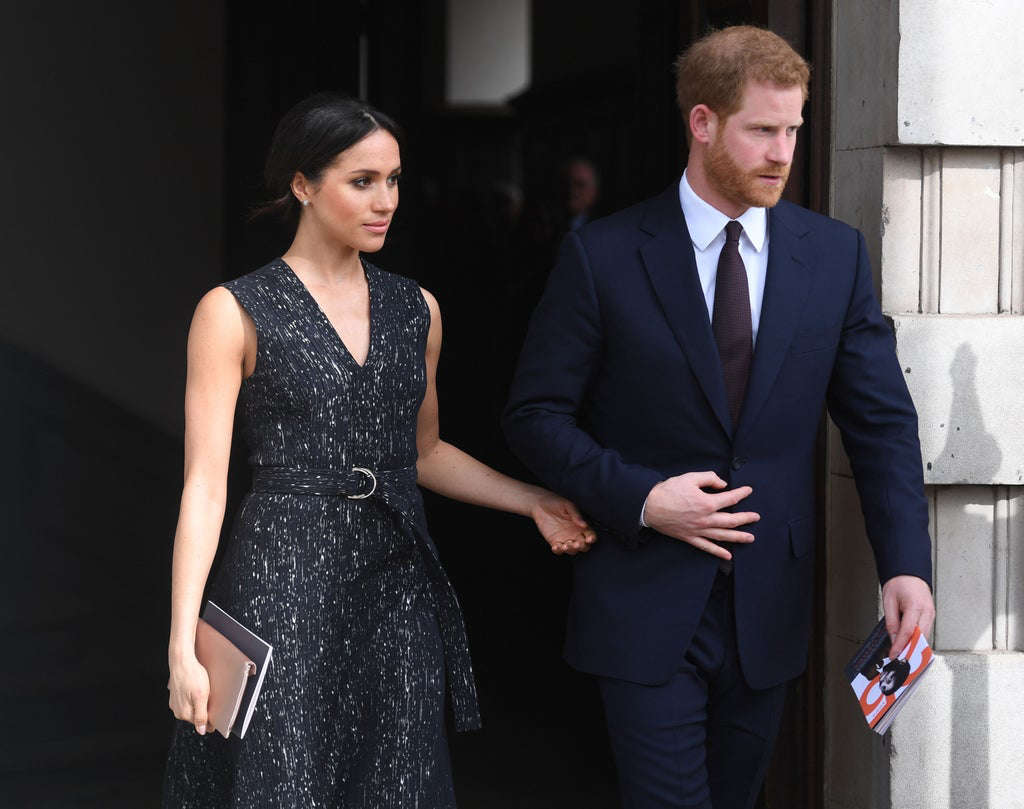 The Duke and Duchess of Sussex have shared their heartbreak over the state of the ‘exceptionally fragile’ world, saying they have been left speechless by the situation in Afghanistan.

Harry, who fought in the country on two frontline tours with the Army, and Meghan also expressed their distress about the earthquake in Haiti and said they were ‘scared’ amid the new Covid variants and continuing global health crisis.

The couple, who quit royal duties for a life in California, urged global leaders to speed up humanitarian talks and asked people to support charities tying to help those in need.

In a joint statement on their Archwell webiste, Harry and Meghan said: ‘The world is exceptionally fragile right not. As we all feel the many layers of pain due to the situation in Afghanistan, we are left speechless’.

‘As we all watch the growing humanitarian disaster in Hairi, and the threat of it worsening after last weekend’s earthqauke, we are left heartbroken’.

‘And as we all witness the continuing global health crisis, exacerbated by new variants and constant misinformation, we are left scared’.

Calling on the international community to alleviate suffering, the Sussexes added: ‘When any person or community duffers, a piece of each of us does so with them, whether we realise it or not.

‘And though we are not meant to live in a state of suffering, we, as a people, are being conditioned to accept it. It’s easy to find ourselves feeling powerless, but we can put our values into action – together.

‘To start, we encourage you to join us in supporting a number of organisations doing critical work. We also urge those in positions of global influence to rapidly advance the humanitarian dialogues that are expected to take place this fall at multilateral gatherings such as the UN General Assembly and the G20 leaders’ summit.

‘As an international community, it is the decisions we make now – to alleviate suffering among those we know and those we may never meet – that will prove our humanity’.

The statement was followed by images of their signatures ‘Harry & Meghan’.

The couple’s not – for – profit Archewell organisation said it was supporting the emergency response in Haiti with its partner World Central Kitchen, and highlighted other organisations such as Women for Afghan Women, Afghanaid, Mercy Corps and Invictus.

Archewell, which was set up by Harry and Meghan after their exit from the working monarchy, vowed to support the military who served in Afghanistan, and the Afghan people.

Following the withdrawal of US troops, Taliban militants have quickly seized control of the country.

Distressing videos showed civilians desperately clinging to the sides of departing planes at Kabul airport in a bid to escape, with some plunging to their deaths.

Thousands of refugees are attempting to flee, and many more remain trapped in desperate situations.

Archewell laid out its commitment on the humanitarian crisis, saying: ‘We hope to do what we can to meet the moment by offering suport to the military community and the troops who served in Afghanistan, as well as to the Afghan people facing violence and terror’.

The Archewell team also called on people to take care of their mental health, saying: ‘Many of you may feel helpless right now as you watch the state of the world spin rapidly.

‘It can feel disorienting and defeating, but we have faith in the power of shared purpose, action and commitment to our collective well – being.

Sharing links to the mental health organisations National Alliance on Mental Health, The Loveland Foundation and Project Healthy Minds, Archewell added: ‘Take care of yourselves, and let’s keep taking care of each other’.